Warning: ksort() expects parameter 1 to be array, object given in /nfs/c03/h06/mnt/166989/domains/thebrightnessblog.com/html/wp-content/plugins/bbpress/includes/core/template-functions.php on line 316
 Conventional Lighting 101 – The Brightness 
Warning: Cannot assign an empty string to a string offset in /nfs/c03/h06/mnt/166989/domains/thebrightnessblog.com/html/wp-includes/class.wp-scripts.php on line 492 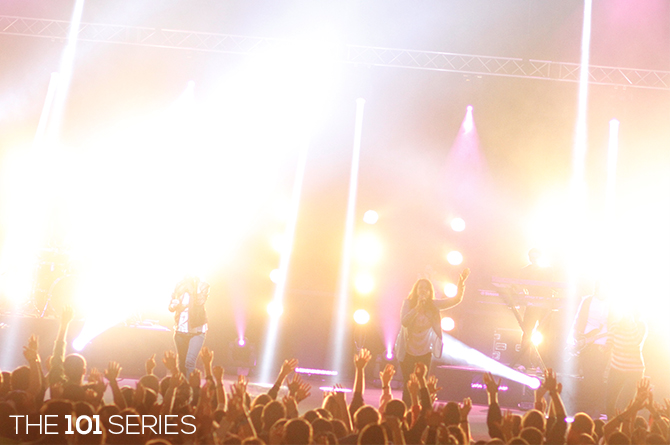 When talking about stage lighting you typically have two main types of lighting: conventional and intelligent. The difference is simple, conventional lighting is basically anything that only has one function, lighting up. Intelligent lighting refers to fixtures that have more abilities, such as focus, color change, gobos, prism, etc.

What makes a fresnel a fresnel is the lens that is in it. You’ll know a fresnel lens by its rings. (see the pic below)

Fresnels were invented in the 1800s to be used in lighthouses, in response to a need for thinner, lighter lenses. At the time they used less glass than a traditional dome lens. Early fresnel lenses used in lighthouses could be used to throw light up to 20 miles. The rings in the lens helps it to direct the light forward evenly, they are cut at angles that reflect light coming from all different angles and points them forward into one, more focused beam. Here’s a simple diagram to give you an idea of how the grooves in the lens help to focus light. 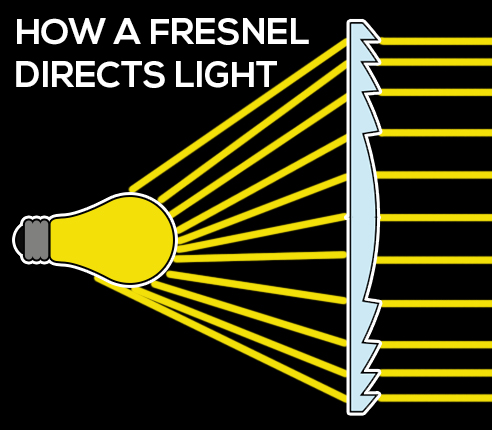 So you can see in the above diagram that the grooves and small dome are able to take light that is traveling in all directions and focus it into a straight path, wasting much less energy and giving you more light output. Many fresnel fixtures made for stage lighting will have a slider that is typically labeled with an S and an F, these let you move the lamp closer to or further from the bulb to give you a soft, diffused light, or a focused beam.

PARs come in lots of different varieties, from source four PARs, to PAR cans, to PARnels, and they can serve some different purposes. What classifies something as a PAR is the reflector in it, PAR stands for Parabolic Aluminized Reflector. A PAR is typically a light that has a reflector, and a lens that are always a fixed distance from the lamp. PAR cans come in a variety of sizes, which can get confusing at times, but something to remember is typically their sizes are in multiples of 8, such as a PAR16, PAR32, PAR64. If you take the size number and divide it by 8 it will give you the diameter of the lens of the light, so for example a PAR64 will be about 8 inches across the front of the light. A PARnel is a PAR that has a fresnel lens on the front, it contains the same reflector as a typical PAR, but also gives you the ability to soften or focus your beam in the same manner as a fresnel fixture.

Like with the PAR, the name Ellipsoidal comes from the type of reflector that it has in it, and is probably the most used lighting fixture in theater and TV production. An Ellipsoidal constists of a lamp, an ellipsoidal reflector, and a lens tube. Lens tubes can be replaced to change the beam angle of the fixture such as 19°, 26°, 36°, 50°, etc. Changing the beam angle helps you to light only the amount of stage that you want to. Further control over coverage comes from the built in shutters, you can see in the picture above four small handles that come out of the top, bottom, and sides of the fixture, these allow you to very precisely shape the beam of the light to make sure that you are only lighting exactly what you want that fixture to light.

The body of the light also has an accessory slot that can be used to drop in an iris, or other accessory. Much like the fresnel, the ellipsoidal also give you the ability to focus or soften your beam, by sliding the lens tube closer to or further from the lamp. The ellipsoidal is also able to project gobos, unlike the fresnel and PAR.

There are so many neat accessories and add-ons you can buy to help your conventionals do exactly what you want them too, lets just go over a few of the basics.

Gel frames are used to put colored filters (gels) in front of the beam of your light to help you change the color or adjust the color temperature of the lighting fixture. Tophats are used mostly in theater so that you can have a fixture pointed towards your audience with out them seeing the actual bright light of the lens. An Iris can be added to an ellipsoidal light to help you to shrink the beam to light less of the stage without having to change the lens.

Barn doors help you to control your beam from spilling onto something you don’t want lit.